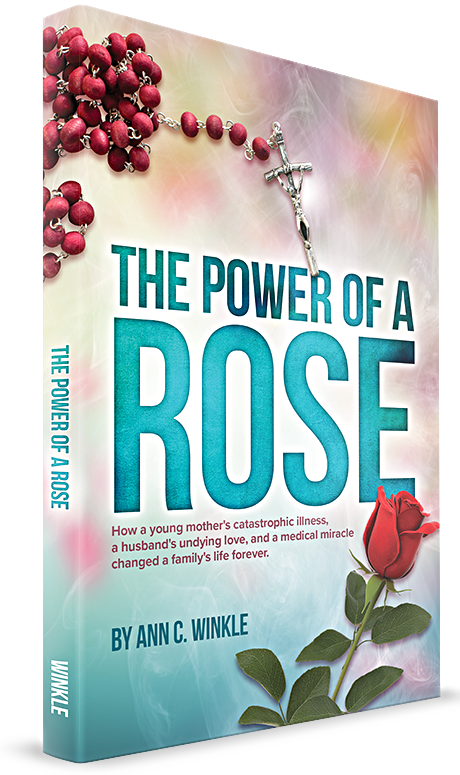 Reviews for The Power of a Rose

Some family stories are run-of-the mill tales of good people whose lives contain little or no drama. Other families live with nothing but drama. Then there are some families, like the Condits of Cincinnati, who have thrust upon them a type of drama, in fact, a tragedy, that can only be managed with extreme love and faith. Such is the tale that Ann Condit Winkle – the 7th of the 11 children in the Condit family – tells in her new book, The Power of a Rose. It is the story of the catastrophic brain aneurysm that her mother suffered in 1966 and the impact of that traumatic event on the family. That was the year her mother, named Rose, was pregnant with baby number 11, although no one was aware of the pregnancy at the time. Here is the stunning opener of this short and immensely interesting book:

“I’m sorry, Mr. Condit, your wife is suffering from a ruptured brain aneurysm. Her cranium is filling with blood as we speak,” the doctor grimly explained to my Dad on a brisk November morning. He went on. “I could attempt to operate, but the outcome is usually death on the table. If she does survive, she is likely to be in a vegetative state for the rest of her life. What would you like me to do?”

Who of us can imagine being handed a moral dilemma of that nature? Yet, Jim Condit, the patriarch of this large family, heroically faced down the dilemma and gave the doctor what he would later describe as his only possible response: “We have ten young children at home. Please go save her.” Rose, the mother of his children, was in the hands of medical professionals, yes, but as everyone knew, she was really in the hands of God.

The power of faith
The incident that Ann Winkle describes was something of a textbook case of Catholic intercessory power, but it was no less miraculous for all that. There, scattered throughout the hallways of the local Catholic hospital, were friends and family members on their knees praying for Rose. The family remembers at least a hundred people praying the Rosary there. Word about the incident travelled swiftly to the local community of neighbors and parishioners, and soon cascades of prayer were flowing heavenward for that young family. With such a dismal prognosis, nothing short of divine intervention would save the mother. When the doctor emerged from the operating room with a bewildered look some hours later, his verdict was that he had just witnessed a miracle. The Condits themselves would be the first to say they did nothing heroic in responding to their mother’s crisis, yet theirs is an extraordinary tale of faith that encompasses everyone in the family as well as a strong community surrounded them in their time of need. They all credit prayer and the power of faith for surviving such a heavy blow to family unity. Carolyn, the eldest daughter, said it best: Going through this experience gave me a lasting appreciation of the power of prayer and faith in others by watching so many good people rally to storm Heaven with their prayers for Mom. . . . It was just the beginning for me to understand that miracles really do happen and that God listens to and answers prayers. As if to add further drama to Rose’s trauma, another hidden fact came to light through the incident. The brain scans the doctor conducted before the surgery indicated something more than just the aneurysm: Rose also had metastatic brain cancer, which no one had detected before the accident. But when Rose recovered from her trauma, the cancer was completely gone. Apparently, Rose Condit had not just received a miracle: she was a walking miracle!

The power of the Rosary
The book’s author, Ann Winkle, is a wife, the mother of four children, a Life Coach specializing in ADHD, and founder of a movement known as Mary’s WAY (acronym for “Women Answering Yes”), a parish-based women’s outreach imbued with a distinct Marian spirituality. Ann has given dozens of talks to Mary’s WAY gatherings and other audiences about her family’s story. She has finally documented the incredible story in The Power of a Rose. Her book is not only a testimony to her incredible mother, Rose, who lived for another 49 years after that tragic incident, but also a tribute to a heavenly Mother, Mary, the Rosa Mystica, who is the one whose “Yes” to God all people of faith seek to emulate. The book offers 28 short chapters recounting the history of her family before, during, and after the aneurysm incident. In those vignettes, Ann does not sugarcoat the difficulties they faced in the immediate aftermath of her mother’s injury. In fact, she puts them in the context of the many trials and challenges, as well as the joys, of a large Catholic family growing up in the modern world. Those of us who have been blessed with large families of origin will find insight, wisdom, and even a great deal of Irish/Italian humor in the story of the Cincinnati Condits, a story that is endearing because it is shared by large families everywhere. In many ways, this delightful and inspiring book is a long commentary on the power of the Rosary to help us on our spiritual journey. One cannot help but see the influence of the beads in the young family’s daily Rosary, often prayed with neighbors by the Marian statue at the side of their local church, or the presence of Marian spirituality in the family. “Take the Blessed Mother with you” was Rose’s constant refrain as the children were growing up, and the tender Mother of God seems to have showered her devoted followers with many blessings along the road of their varied and dynamic family life.

Tangible blessings
It is clear to anyone who knows the Condits that the most potent of all the blessings bestowed by God on their family has been – more Condits! In fact, as the author was finalizing her book for publication, her own daughter, Jennifer, gave birth to the 100th grandchild of Rose and Jim Condit (a cavalcade of 61 grandchildren and 39 great-grandchildren, with several more on the way). Knowing them as I do, I believe their whole family’s pro-life spirit and openness to life has made the very City of Cincinnati a much better place for three generations! Several of Ann’s siblings have rivaled their parents by having their own families of more than nine children each. Even that last little boy, David, who was in the womb in 1966, now has ten children of his own. The book includes an amazing array of pictures documenting significant moments in the family’s history so as to concretize all the blessings Ann speaks about in the pages.

Way of Mary
Ann Condit Winkle’s mission is not only to tell her mom’s and her family’s story of faith, but to spread devotion to Christ through Our Lady. On her website, she says: Mary’s WAY is a Catholic Women’s Organization whose mission is to deepen our love and faith in Jesus Christ, by following the perfect example of His mother, our Blessed Mother, Mary. We achieve this through lovely, candle light dinners, inspirational speakers, prayer, fellowship, and service to others. . . . Since 2002, thousands of women have come together to be inspired, laugh, pray, and commit themselves to following Mary’s WAY in their daily lives, ultimately becoming closer to our Lord and Savior, Jesus Christ. So far, Mary’s WAY is achieving the ends for which it was founded: to increase love of Christ through Mary. Apart from the incredibly inspiring stories in this new book, I always marvel at those who can take personal and familial sufferings and somehow weave them into missions for others. That is the way of our Blessed Lady, the way of the saints, and it must be our way if our faith means anything to us in the world. We all experience suffering in our lives, but much of the benefit of suffering depends on how we respond to it. One of the most moving chapters of Ann Winkle’s book is called “Unanswered Prayers” which seeks to show us how to turn our sufferings into moments of grace for others. Yet, whether it is the power of a mother named Rose who inspires you to take on a mission for others, or the power of the Rosary, one thing is for sure: our only strength comes from the power of the One who rose from the dead and brought us life!